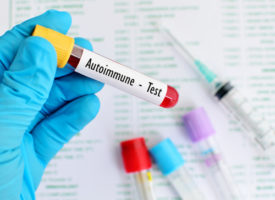 Conventional physicians’ only answers to treating autoimmune diseases are prescription drugs that suppress the immune system, corticosteroids that reduce inflammation and manage relapses, and a plethora of medications that attempt to address the symptoms of autoimmune disease. Never mind that these pharmaceuticals have long lists of adverse side effects, both “minor” (such as nausea, headaches, and significant weight gain) and major (increased risk of cancer and life-threatening infections).

This boneheaded approach stems from the shortsighted belief that because these autoimmune disorders involve an immune attack on the body’s own tissues, the immune system must be hammered into submission. However, the immune system is not at fault. It doesn’t suddenly go rogue without provocation. Something has to instigate it.

For example, chronic Lyme disease, which mimics symptoms of autoimmune disorders, is caused by a bacterial infection. A microbe called mycoplasma is a common culprit in rheumatoid arthritis and related diseases that affect the joints and connective tissues. Gluten in wheat, barley, and rye prompts an immune response in patients with celiac disease that destroys cells in the small intestine. And environmental toxins are implicated in a number of serious autoimmune disorders.

The logical approach to treating autoimmune diseases is to remove the thorn, so to speak, and support immune function rather than attack it. That’s exactly what we do at Whitaker Wellness, and for most of our patients, it works wonders.

First, we tackle the usual suspects in autoimmune disorders. We check heavy metal levels—something few doctors do—and remove toxins with chelation therapy. A patient with multiple sclerosis (MS) came to see us because he was going steadily downhill, despite an intensive drug regimen. Testing revealed high levels of lead, aluminum, and mercury, so he underwent a course of chelation. A few months later, he was in remission.

Because 80 percent of the body’s immune system resides in the gut, optimizing gastrointestinal (GI) health is essential when treating autoimmune diseases. At Whitaker Wellness, we test for parasites, bacterial and fungal overgrowth, food allergies, and leaky gut syndrome; help patients clean up their diets; and address GI problems with supplements such as probiotics, fish oil, and L-glutamine. A family friend came to the clinic with debilitating Crohn’s disease. He had chronic diarrhea and had wasted away to 126 pounds. Diet changes and an intensive gut restoration program helped him regain much of his lost weight and dramatically reduced the frequency of flare-ups.

We also work on eliminating infections, an important but overlooked factor. Patients with ulcerative colitis are given natural antimicrobials such as uva ursi, oregano oil, and garlic. Those with chronic, unresponsive diseases like Lyme are treated with IV vitamin C, which kills all types of bacteria and viruses. And patients with rheumatoid arthritis and scleroderma are prescribed low-dose antibiotics. (Note: While antibiotics are wildly overprescribed, this low-dose treatment for autoimmune disorders is extremely effective.) This commonsense approach to treating autoimmune diseases has been used for decades and is supported by scientific research, but because it doesn’t jibe with the immune system-suppression belief, it’s ignored.

Immune-suppressing drugs and corticosteroids may be necessary in severe cases of autoimmune disorders, but these terribly dangerous medications should be used only as a last resort. If patients are to have any chance of overcoming these difficult conditions and regaining their health, the immune system must be supported and balanced, rather than squelched.

We place all our patients on a comprehensive nutritional program, starting with an anti-inflammatory, allergen-free diet, a potent multivitamin, and enough vitamin D to bring the blood level into the 50–80 ng/mL range. Vitamin D plays a key role in immune function, and research reveals clear associations between deficiencies and autoimmune disorders. We also emphasize fish oil and curcumin, natural anti-inflammatories that help regulate inflammatory cytokines, reduce pain and swelling, and ameliorate the disease process.

One prescription drug is a must for anyone suffering with an autoimmune disorder: LDN. Very small doses of this medication have a profound effect on the immune system, not by suppressing or boosting but by balancing it. LDN is a godsend for treating autoimmune diseases. Vicki had a severe form of MS that affected her balance, speech, and memory and left her depressed and essentially housebound—until she discovered LDN. Days after starting on it, her pain and energy improved. Within six months, her symptoms of autoimmune disease resolved and she was off all other medications.

More than 80 conditions affecting organs throughout the body are classified as autoimmune disorders, so there’s no one-size-fits-all protocol for symptom management. Hyperbaric oxygen therapy helps patients with MS because it reduces inflammation in the central nervous system. Joint and back pain often respond to high-intensity laser, microcurrent, and infrared light treatments. Natural bioidentical hormone replacement is particularly useful for women with MS. Stem cell therapy benefits a broad range of conditions. And most everyone reports symptom improvement with acupuncture.

As you can see, there are many safe, effective options for treating autoimmune diseases. Unfortunately, few physicians will help you implement them. In fact, Sue Grundy, who suffered with rheumatoid arthritis for a decade, came to Whitaker Wellness all the way from Australia to get the help she needed.

“I have a way to go to have a full recovery, but after being at your clinic for two weeks, I know that it is closer than ever. Your treatments have restored my energy. Before, I was dragging around and feeling exhausted, but I didn’t even have jetlag from the 21-hour flight back to Australia! I still have some aches and pains in my joints but the constant pain in my back is gone. And despite what my doctor told me when I refused immune-suppressing drugs, I am not crippled or in a wheelchair.

“I have come home with hope, a renewed energy of purpose, and an inner core strength of renewal. I haven’t felt like that for so long. Your clinic leads the way by shining a light on ‘good’ medicine as opposed to the Big Pharma-led practices that are not in the best interest of the majority of patients.”

Suggested supplements for treating autoimmune diseases include vitamin D, probiotics, fish oil, L-glutamine, uva ursi, oregano oil, and curcumin. Use as directed. To learn more about autoimmune disorder treatment at Whitaker Wellness, call 866-944-8253 or fill out this form to see if you are good candidate for the clinic.

Tips for a Healthy Thanksgiving
Back Pain Treatments That Really Work