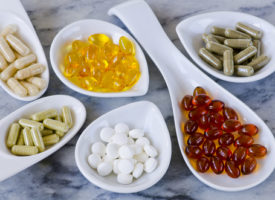 In last week’s blog we talked about how to boost your immune system with lifestyle measures. However, that’s certainly not the only way you can support your immune system. Taking a good multivitamin and mineral supplement each day is also important. And there are additional immune boosting supplements that will come in handy this cold and flu season. Here are a few of my favorites.

Vitamin C is an essential nutrient for immune system support. It increases the production of important immune system components, including neutrophils, phagocytes, interferon, and natural killer cells. It also simulates the activity of antibodies, which the immune system uses to identify and neutralize microbes and other foreign invaders. Infections and other illnesses deplete vitamin C, and since your body cannot produce or store it, you need to replace it every day.

Because vitamin C is water-soluble you can safely take large doses without fear of toxicity. However, high doses of oral vitamin C can cause loose stools, so start with 500 mg per dose and build up to higher or more frequent doses gradually. I recommend eventually taking at least 1,000 mg daily, in divided doses, with meals. For extra immune system support, you can take up to 10,000 mg daily. Vitamin C is available in supermarkets and health food stores.

In addition to taking vitamin C orally, intravenous (IV) vitamin C  is an effective treatment for viral and bacterial infections, something most conventional doctors fail to recognize. Therefore, it’s an amazing therapy to help boost your immune system. Very high blood levels of vitamin C are toxic to microbes (and cancer cells)—but completely safe for normal cells. Achieving blood levels high enough to provide this therapeutic effect, however, is only possible with IV vitamin C. At the Whitaker Wellness Institute we use IV vitamin C to treat a number of infectious diseases, ranging from serious infections like Lyme disease to colds and flu. Many of our patients—who come in for IV vitamin C during cold and flu season simply for prevention or when they notice the first signs and symptoms of a viral infection—report great results. To learn more or to schedule an appointment, call (866) 632-8890.

The mineral zinc has been shown to have a direct antiviral effect, in addition to its crucial role in the production of various immune system cells. A study published in the Annals of Internal Medicine revealed that zinc gluconate lozenges significantly reduced recovery time in the common cold, and another study using zinc nasal gel produced similar results.

The recommended dose is one lozenge dissolved in the mouth every two to three hours. (Check labels to ensure that the lozenges contain at least 12 mg of zinc gluconate.) The gel is applied in the nostrils every two to four hours. These products are most effective if started when you first become aware of symptoms; use for about three days. Look for zinc lozenges and nasal gels in supermarkets and pharmacies.

Pycnogenol is an extract of maritime pine bark that has a number of demonstrated benefits, and one is the ability to boost your immune system—especially when used in combination with vitamin C and zinc. Italian researchers looked at the effects of various combinations of Pycnogenol, vitamin C, and zinc in adults with colds. The clear winner for immune system protection was the combo of all three. Whereas untreated colds lasted seven days, study participants who took 100 mg of Pycnogenol, 200 mg of vitamin C, and 30 mg of zinc daily in divided doses had resolution after only four days. Better still, symptoms such as runny nose, nasal congestion, sore throat, sneezing, and cough were significantly reduced.

A quality multivitamin should provide adequate zinc and vitamin C. Pycnogenol is available in health food stores, online, or by calling 800-810-6655. Keep these supplements on hand and begin taking at the first sign of symptoms. Adding them to your daily regimen may also help boost your immune system and help stave off colds.

It’s no coincidence that cold and flu season occurs during the winter, when vitamin D stores are at their lowest. In addition to its many other benefits, vitamin D turns on genes that boost production of antimicrobial peptides called cathelicidins, which destroy viruses, bacteria, and other germs. Limited sun exposure during the wintertime results in minimal vitamin D production—and a compromised immune system.

There’s plenty of research to support vitamin D as an immune boosting supplement. Studies show that children who are exposed to sunlight are less likely to get colds. Kids with rickets (a vitamin D deficiency disease) are prone to respiratory infections. African-Americans, whose dark skin predisposes them to lower vitamin D production, are more likely than Caucasians to die from influenza and pneumonia. Older folks in Norway and other countries with high intakes of vitamin D are at reduced risk of dying during the wintertime.

Protect yourself by getting your vitamin D blood level tested and taking enough of this immune boosting supplement to maintain a level of 50-80 ng/mL. For most of my patients, this requires supplementing with about 5,000 IU of vitamin D3 per day.

For even more immune system support, I also recommend N-acetylcysteine (NAC), which is a precursor to glutathione, the body’s preeminent antioxidant. Italian researchers recruited older people who had not had flu shots but were considered to be high risk of flu because of chronic non-respiratory diseases. They were randomly divided into two groups and given either 600 mg of NAC or a placebo twice a day for six months during the fall and winter. Although exposure to the prevailing viral strains was similar in both groups, just 25 percent of those taking NAC developed symptomatic flu versus 79 percent in the placebo group. Try adding 1.2 g of NAC to your daily routine (in divided doses) this fall and winter for additional immune system support.

Echinacea (Echinacea purpurea), also known as purple coneflower, first garnered the attention of American settlers in the 18th and 19th centuries when they heard tales of this perennial plant’s use by the indigenous people to treat a wide variety of illnesses. Since then, research studies have unraveled the mystery behind this herb’s effect on the immune system. Echinacea supports your immune system by stimulating your white blood cells, which circulate throughout your body and rally your defense mechanisms into action.

Although echinacea has been plagued with some controversy, a meta-analysis published in Lancet Infectious Diseases showed it not only shortened the duration of colds by about a day and a half, but it lowered the odds of catching one in the first place by nearly 60 percent! You can find echinacea supplements and products at your local supermarket or health food store. Use as directed.

Elderberry (Sambucus nigra L.) is another proven infection-fighting herb. In an Israeli study, 40 people in the early stages of the flu were treated with either elderberry extract or a placebo. Both the duration (two to three days versus six days in the placebo group) and severity of flu symptoms decreased in the herbal group. Elderberry is most effective as an immune boosting supplement when taken in the very early stages of a cold or flu. The brand I recommend is Sambucol. Look for it in your local pharmacy or health food store. Use as directed.

Note: Echinacea and elderberry are safe, but both are recommended for periodic, rather than continuous use.

Bolstering your immune system is vital if you want to maintain overall good health and well-being. By following the simple recommendations I’ve shared in this and last week’s blog posts, you can rest assured that you will be armed not only during cold and flu season but year-round.

Simple Steps to Boost Your Immune System
Do You Really Need Antibiotics?