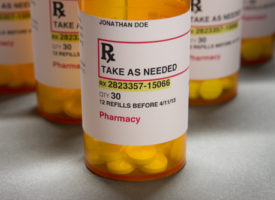 Aegrescit medendo: “The disease worsens with the treatment” from the Aeneid by Roman poet Virgil, 70–19 BC

As a conventionally trained physician, I recognize and appreciate the breakthrough medications that truly save lives and enhance health. However, far too many prescription drugs do more harm than good. Many medications on the market are superfluous, at best, and downright dangerous, at worst. All told, dangerous prescription drugs are the fourth leading cause of death in the United States. Now, if that’s not worsening the disease, I don’t know what is.

Some of Big Pharma’s most popular pharmaceuticals actually cause or exacerbate the very conditions they are supposed to treat. In part one of this two-part series, we’ll delve deeper into some of the dangers of prescription drugs.

What’s the worst possible outcome of depression you can imagine? That’s right, it’s suicide. What do physicians prescribe for depressed patients? Antidepressants, of course. And what’s the most serious prescription drug danger associated with antidepressants? Increased risk of suicide!

This is a shining example of how prescription drugs do more harm than good. Using these medications to treat depression is like trying to put out a fire with gasoline. Every antidepressant sold in this country is required by the FDA to have a black box label warning, “Antidepressants increased the risk compared to placebo of suicidal thinking and behavior (suicidality) in children, adolescents, and young adults in short-term studies of major depressive disorder (MDD) and other psychiatric disorders.” It’s a label that many experts believe should be amended to include all age groups and other significant adverse effects, such as increased risk of extreme agitation and acts of uncharacteristic violence.

Dangers aside, antidepressants are no more effective than placebos for most of the people who take them. A comprehensive meta-analysis published in JAMA concluded: “True drug effects (an advantage of [antidepressants] over placebo) were nonexistent to negligible among depressed patients with mild, moderate, and even severe baseline symptoms….”

In other words, only patients with disabling depression have even the slightest chance of being helped by antidepressants. Yet the overwhelming majority of those who take these drugs—and are exposed to their incapacitating and disastrous side effects—just feel a little blue. One in 10 Americans pops these pills every day, which means we have 30 million people taking drugs that can only make them worse. In addition to increasing risk of suicide and violent behavior, antidepressants (especially SSRIs such as Prozac, Paxil, and Zoloft) are notorious for causing loss of libido, erectile dysfunction, weight gain, gastrointestinal problems, and headaches.

Rather than depending on antidepressants, look into therapies that actually work, such as hormone balancing, regular exercise, and nutritional supplements like SAMe, fish oil, and St. John’s wort.

The leading cause of death in people with diabetes is cardiovascular disease. But physicians, with their myopic focus on lowering blood sugar, routinely prescribe dangerous prescription drugs that actually increase this risk.

Since 1984, sulfonylureas (a common class of diabetes medications that includes glipizide, glyburide, and glimepiride) have carried a black box label warning that they increase risk of death from heart attack. In the early 2000s, we began hearing about the adverse cardiovascular effects of thiazolidinediones (Avandia and Actos). A study published in the New England Journal of Medicine in 2007 linked Avandia with a 43 percent increased risk of heart attack and a 60 percent increased risk of cardiovascular death.

European regulators pulled Avandia off the market in 2010, citing safety issues concerning heart attacks, strokes, and death. The FDA, in predictable fashion, put the interests of the drug companies above the safety of the American people and announced it would “significantly restrict” its use.

When the fox is guarding the henhouse, you have no choice but to look out for yourself. If your doctor wants you to continue taking these terribly dangerous prescription drugs, do yourself a favor and look for a new physician. There are a number of safe and effective natural treatments for diabetes such as weight loss, diet, exercise, and supplements like berberine, vanadyl sulfate, cinnamon, and chromium. Getting a handle on blood sugar is important, but why do it with dangerous prescription drugs that can kill you?

If you have osteoporosis, it’s likely that your doctor has talked to you about Fosamax, Actonel, Boniva, or another bisphosphonate drug. These medications, which rake in $8 billion annually in worldwide sales, are prescribed to prevent fractures. But these dangerous prescription drugs often make matters worse.

Bisphosphonates have long been linked with degeneration of the jawbone and a few years back the FDA issued a warning that extended use is associated with “atypical” fractures of the thigh bone. In the same breath, however, the agency told consumers to “keep taking your medication unless you are told to stop by your health care professional.”

This is bad advice. In addition to causing the very problems they’re prescribed to prevent, bisphosphonates aren’t very effective. Your doctor may tell you that they reduce the risk of fracture by 50 percent, but that’s just a statistical spin. In a widely cited study, Fosamax decreased the likelihood of fracture from 2.2 to 1.1 percent. Yes, that’s a relative risk reduction of 50 percent. But in terms of absolute risk reduction—the far more important consideration—it’s only a 1.1 percent drop. The number needed to treat (NNT) in order to prevent just one fracture is 100. The other 99? They’d be better off—a lot better off—taking a placebo.

Equally disturbing, these meds are pushed on people who have no business taking them. The studies focus on older women who have already had an osteoporotic fracture. Yet Big Pharma has a much larger population in their sights: younger women with osteopenia (relatively, but not critically, low bone density) who’ve never had a fracture. Inexplicably, doctors go along with this sham, writing prescriptions for expensive drugs that these low-risk women will be taking for the rest of their lives—willingly exposing them to irritation and ulceration of the esophagus, bone and muscle pain, and increased risk of atrial fibrillation, to mention just a few of the adverse effects that have surfaced so far.

Fractures are serious business, but you can reduce your risk with weight-bearing exercise, bioidentical hormone replacement therapy, and bone-building supplements such as vitamins D and K, calcium, strontium, and other minerals.

Next week, in part two of this series, we’ll discuss another class of prescription drugs that do more harm than good. I’ll also share a few ways to protect yourself from falling victim to these dangerous drugs and provide the safe, natural protocols we use at Whitaker Wellness to treat these health concerns.