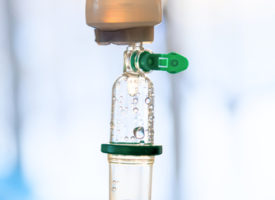 It’s not every day that I get to share an article from the very first issue of Health & Healing. But the article on chelation therapy you are about to read was published in August of 1991 in the inaugural issue of my newsletter. Twenty-four years later, I’m proud to say that we still regularly prescribe chelation therapy to our patients for a variety of health concerns and it works as well today as it did more than two decades ago. Enjoy this blast from the past that’s as relevant today as it was back then.

EDTA Chelation Therapy Gets Your Body’s Toxic Poisons Out

EDTA chelation therapy is a relatively old, but not widely understood, therapy for vascular and heart disease. EDTA is a protein-like substance which has an affinity for minerals deposited in the body. When the substance is diffused into the body slowly, it attaches to minerals—particularly heavy metals such as lead and cadmium—and makes them soluble. The EDTA-mineral complex is then excreted from the body via the urine. It is the most effective therapy for heavy metal poisoning, and has been used successfully for such for over 30 [now 50+] years.

Chelation therapy first gained favor as a therapy for more than just heavy metal poisoning in the 1950s. Men who had taken on substantial amounts of lead while painting World War II battleships in the 1940s were receiving EDTA infusions to “get the lead out.” Physicians discovered that those with chest pain or leg pain from atherosclerosis experienced almost unbelievable improvement. The emphasis is on “discovered” here to differentiate it from something that is invented, like angioplasty, but never proven.

This discovery was followed by a lot of enthusiasm for EDTA chelation therapy as a treatment for heart and vascular disorders, and further usage confirmed the original discoveries. But then in 1963, Dr. Lawrence Meltzer of Philadelphia published an article in which he concluded that EDTA chelation therapy was not beneficial. Having recently reviewed that article, I am surprised at his conclusions! They weren’t even consistent with the data in his own article.

Twelve deaths out of 38 patients in four years (about 8% per year) was not an excessive death rate at that time in history. Heart disease was a much more virulent disease in the 1960s than it is now, and these patients were quite ill to begin with. Numerous writers have estimated that the death rate in comparable patients to these, at that time, was between 10% and 15% per year.

The death rate for heart disease patients has fallen dramatically since then, owing primarily to improved diet and medications. However, at that time and based on this study alone, Dr. Meltzer concluded that EDTA is “not a useful tool in the treatment of coronary disease at the present time.”

There is no therapy that just makes heart disease go away, and a therapy that has a 60% improvement is way above the 30% to 40% placebo reaction. Not only that, but 40% sustained improvement for four years was, in my opinion, significant. Furthermore, his conclusion did not even mention any other “scientifically proven” therapy that might be superior to EDTA chelation therapy.

However, and this is what really concerns me most, the medical profession is not governed by science—or even good sense. Quite the contrary, it follows the dictates of “authority figures.” Therefore, EDTA chelation therapy lost favor, not on the strength of scientific controlled trials but by authoritative decree that was based upon an article whose data did not support its own conclusions, and did not even mention a superior therapy.

It is almost as if the profession breathed a sigh of relief that an inexpensive office-based therapy “did not work.” This seemed to provide the impetus, and the profession was then off and running—developing lucrative, dangerous, and often debilitating surgical procedures  to open up blocked arteries in the heart and legs.

Only a handful of physicians persisted in using EDTA chelation therapy, and continued to report that it substantially benefited patients with heart and vascular disease. In spite of consistent and sometimes vitriolic opposition from more orthodox medical circles, close to 500,000 patients have undergone this therapy for heart and vessel disease—not only without any significant side effects, but with a consistent report of benefit.

In a study by clinical cardiologist Efrain Olszewer, MD, EDTA chelation therapy produced significant results in 2,800 patients. Close to 2,000 of these patients suffered from heart disease and artery disease in the leg, and in this group there was more than a 90% improvement after therapy. This included significant improvements in the EKGs of the heart patients while undergoing exercise stress tests.

With improvements like these, one has to wonder why EDTA chelation therapy isn’t quickly and readily accepted. Part of the problem more orthodox physicians may have with accepting it is that no one truly understands why it works. Recent evidence seems to indicate that the therapy acts as a powerful antioxidant, similar to vitamin C and vitamin E, protecting the cell from damage by the free radicals I have already mentioned. As such, it seems to improve other disorders and acts as a general rejuvenator while it is cleansing the body of harmful mineral deposits.

How to Get Chelation Therapy

For more information on undergoing chelation therapy near you, visit acam.org. For treatment at the Whitaker Wellness Institute, call (866) 632-8890.