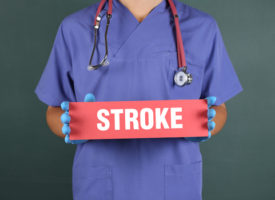 The day started out like any other. J. recalled feeling dizzy when she first woke up, but she chalked it up to the flu that was going around and went back to sleep. When she woke up again, she had trouble getting out of bed, felt off balance, and fumbled with the coffeepot, so she figured she was coming down with something. That afternoon her son called and, concerned about her garbled speech, came over. He took one look at her and called 911—seven hours after her first signs of a stroke.

J. did what many people do when they’re having a stroke. She brushed off the warning signs and hoped they’d go away. Big mistake. Two million neurons die and 14 billion synapses are lost every minute a blood clot or bleed cuts off oxygen to the brain. Minutes can mean the difference between function and disability, hours between life and death.

Hospitals have a pretty good treatment for acute ischemic stroke, the type that affects 80-85 percent: drugs like tissue plasminogen activator (tPA), which dissolve the clots that cut off blood flow. The problem is these medications must be administered within four and a half hours after a stroke, and most people, like J., don’t get to the hospital in time. As a result, just four percent of stroke patients are treated with clot-busting drugs.

Survivors do have some spontaneous recovery, and physical, occupational, and/or speech therapy helps them relearn lost skills and cope with their disabilities. But at some point, usually after about six months, rehab is stopped and patients are told there’s nothing else to be done for stroke recovery.

But J. did something most people do not do. She came to Whitaker Wellness for hyperbaric oxygen therapy (HBOT).

HBOT is a safe, noninvasive outpatient treatment that could save thousands of lives, billions of dollars, and unimaginable pain and suffering. It’s also an incredible natural therapy for stroke. Administered by breathing 100 percent oxygen in a pressurized chamber, HBOT suffuses the brain and body with high concentrations of oxygen. This is crucial for stroke recovery as this influx of oxygen decreases pressure in the brain, relieves fluid buildup and inflammation, and provides energy needed for repair and regeneration. It also promotes the growth of new blood vessels in damaged areas, thereby improving cerebral blood flow over the long term.

In addition to the focal area of irreversibly damaged neurons, there’s a surrounding zone of brain cells that are dysfunctional but still alive. HBOT wakes up these stunned neurons. It also stimulates the proliferation of new neurons by increasing the expression of brain-derived neurotrophic factor (BDNF) and mobilizing the body’s stem cells. Bottom line, HBOT facilitates neuroplasticity, the ability of the brain to modify and create new neural pathways to compensate for deficits.

Many hospitals have HBOT chambers, but they never use them for stroke recovery. It’s inexplicable. Restoring cerebral blood flow and oxygen delivery is the primary goal in the treatment of acute stroke. HBOT is a natural therapy for stroke that has a good chance of reducing irreversible brain damage, even in the 96 percent of patients who miss the tPA treatment window. But they aren’t even told about it!

Most of the hundreds of stroke patients we’ve treated at Whitaker Wellness are either well-informed Health & Healing readers, former patients—or they’re lucky enough to have a knowledgeable friend or loved one who encouraged them to try HBOT.

J.’s son brought her to the clinic six months after her stroke. She was using a walker, her speech was still slurred, and she required help with self-care. Within three weeks of starting treatment, she was walking on her own, speaking normally, and eventually returned to most of her former activities.

Like J., the majority of patients seek stroke recovery treatment after conventional medicine has given up on them. But HBOT can perform miracles months, even years after a stroke. Israeli researchers demonstrated this in a randomized clinical trial of patients who received 40 HBOT treatments six months to three years post-stroke. Virtually every study participant had significant improvements in function and quality of life, as well as SPECT scan changes showing increased activity in the brain.

About a quarter of the 800,000 strokes that occur in the US every year are recurrences, so you need to be extra vigilant about prevention. Most doctors use prescription drugs to prevent clot formation and lower blood pressure and other risk factors, and in some cases medications are necessary. But there are other ways to reduce risk.

Recommended supplements include folic acid, vitamin C and other antioxidants, vitamin D, magnesium, omega-3s, and coenzyme Q10. Potassium also deserves a callout, but it is best obtained from diet.

At Whitaker Wellness, we also test for sleep apnea, which is a significant risk factor for stroke. If a patient has serious cardiovascular disease, we suggest a course of EECP, and for those with lingering memory problems, depression, or anxiety, neurofeedback does wonders. The clinic also has an arsenal of pain relieving therapies that are beneficial for stroke recovery.

After spending three weeks at the clinic with her husband who was recovering from a stroke, Jane commented, “You can really tell his brain is being repaired, and I expect him to get better and better as he continues with his therapy. Thank God my friend urged me twice to come here, and thank God I listened.”

Recommendations for Stroke Recovery and Prevention

To learn more about hyperbaric oxygen as a natural therapy for stroke, or to make an appointment at Whitaker Wellness, call 866-944-8253. To find a treatment center in your area, visit www.hyperbariclink.com.