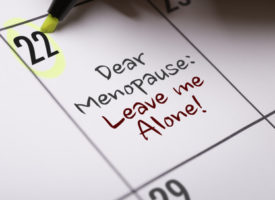 This summer, Connie and I will celebrate our 20th wedding anniversary and I can honestly say these past two decades have been the happiest of my life. Connie is the most energetic, vivacious, and upbeat person I know. She’s always on the go, and I could never lose her in a crowd because all I have to do is listen for her laugh.

Several months after we were married, however, I saw another side of her. She was up at all hours of the night and had little energy or motivation. She complained of brain fog and was uncharacteristically irritable, quick to anger, and depressed. I was actually concerned that she was having second thoughts about our marriage. So I went into doctor mode.

As it turned out, Connie, who was in her early 40s at the time, was going through perimenopause (peri- means around). I suggested that she start on bioidentical hormone replacement therapy (HRT), and within a couple of weeks, she was back to her usual bubbly self—free of those common symptoms of menopause.

Signs and Symptoms of Menopause

A recent survey from the Study of Women’s Health Across the Nation reported that more than half of women had frequent vasomotor symptoms (hot flashes and night sweats) that lasted an average of 4.5 years after their final menstrual period. Given that women usually begin noticing symptoms in their early to mid-40s and the average age of menopause is 51, we’re talking years here. In this particular study, the total duration of symptoms averaged 7.4 years. In real life, 10-15 years isn’t uncommon. I’ve had patients in their 70s who are still symptomatic!

Ladies, that’s a long time to endure poor sleep, moodiness, and an off-kilter internal thermostat. The good news is the solution that worked for Connie has worked for millions of others. The bad news is that many women—and doctors—are afraid of HRT.

Don’t Be Afraid to Use Hormones for Menopause…

Re-evaluation of study data, however, revealed that the dangers of HRT were blown way out proportion and that risks were generally confined to the older women in the study, who ranged in age from 50 to 79. Clinical guidelines now acknowledge that HRT is the most effective therapy for menopausal symptoms and that benefits outweigh the risks for women who start HRT before age 60, within 10 years of menopause, at the lowest doses, and for the shortest duration possible.

Yet some doctors continue to discourage HRT and most dismiss it altogether for older women, including those who are suffering with menopausal symptoms. What these physicians don’t seem to understand is that not all hormones are created equal.

…As Long As They’re Bioidentical

The drugs used in the WHI were Premarin (conjugated estrogen made from pregnant mares’ urine) and Prempro (a combination of Premarin and progestin, a synthetic replacement for progesterone).

Why any woman or doctor would opt for horse estrogen and fake progesterone to treat menopause is beyond me. The only possible explanation is the influence of Big Pharma, which can’t patent the natural stuff but make a bundle off HRT drugs.

There are many disadvantages to Premarin and progestin. Oral estrogen (Premarin) is associated with an increased risk of blood clots and strokes; topical estradiol (the dominant form of estrogen) applied to the skin is not. Progestin increases risk of breast cancer while the women in the WHI who had had a hysterectomy and took estrogen alone had a reduced risk.

That’s why the doctors at Whitaker Wellness prescribe only natural progesterone, which is a chemical twin of the hormone produced by the body, and bioidentical estradiol in creams, gels, or patches. We also often add a small amount of topical testosterone to perk up sex drive and mood.

The benefits of bioidentical HRT go beyond relieving the symptoms of menopause. Estrogen, progesterone, and testosterone are active in the brain, blood vessels, bones, muscles, genitourinary tract, skin, and throughout the body, and declines in these hormones play a significant role in the degenerative changes associated with aging. Hundreds of studies, some with decades of follow up, suggest that women on bioidentical HRT are healthier and more vibrant with lower rates of osteoporosis and heart, autoimmune, and neurodegenerative diseases.

I imagine some of you were expecting my recommendations to be supplements and other natural therapies. Truth is, nothing comes close to working as well as HRT for hot flashes, vaginal dryness, mood changes, and other symptoms of menopause.

That’s not to say natural treatments for menopause don’t help. A recent study found women who received up to 20 acupuncture treatments in a six-month period had 37 percent fewer episodes of hot flashes, compared to an increase of 6 percent in a control group, and benefits endured over 12 months.

Phytoestrogens, plant compounds with weak estrogenic effects, may also help. A diet rich in soy, a concentrated source of phytoestrogens, is credited with Japanese women’s reduced frequency of hot flashes, and supplements containing high doses of genistein, a soy isoflavone, have been shown to reduce hot flashes. Black cohosh and red clover extracts have also been demonstrated in clinical trials to improve menopausal symptoms.

Exercise, a Mediterranean diet, avoiding alcohol and caffeine, yoga, and meditation may ease your way through the change of life, and menopause-related problems such as vaginal dryness, loss of libido, depression, anxiety, and bone loss can be treated with targeted natural therapies.

However, my number-one recommendation for menopause is bioidentical HRT. I am so confident of its efficacy and the safety of long-term use that my own wife has been on such a regimen for 19 years now. You know what they say: Happy wife, happy life. And she and I both are convinced HRT has contributed greatly to her well-being.

If you are experiencing hot flashes and other menopausal symptoms, no matter what your age, talk to your doctor about bioidentical hormone replacement therapy. To locate experienced doctors, visit A4M.com. To schedule a complimentary consultation with one of our friendly and knowledgeable Patient Services Representatives, fill out this form. To make an appointment with a Whitaker Wellness physician, call 866-944-8253.