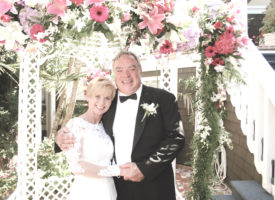 Connie and I are coming up on our nineteenth wedding anniversary this summer, and I have to say, I love being married to this woman. Of course, we have our ups and downs, but overall, our happy marriage enriches us both. Our state of “wedded bliss” makes us fortunate not only for the obvious reasons, but also because research suggests that a happy union confers numerous health benefits on both husbands and wives. Let’s take a closer look at how love and health are related.

Is Marriage More Beneficial for Men?

Men are particularly blessed by marriage, whether it’s happy or not. Several studies in recent years have shown that just being married makes men healthier. Compared to divorced or widowed men, married men drink and smoke less, eat better, are more likely to exercise, are less likely to engage in risky behavior, wear seatbelts more often, and have more frequent checkups. Their risk of some serious diseases such as Alzheimer’s is lower, and statistically they live longer than unmarried men.

Women, on the other hand, reap fewer benefits simply from being married. This isn’t all that surprising when you think about it. Women live longer than men anyway, married or not. They don’t do as many stupid things as men. They have better support systems and handle stress better. They’re more proactive about their health, and they’re more nurturing to themselves and to others.

For Better or For Worse

What does affect women, however, as well as men, is the quality of the marriage. The emotional and physical health of each spouse thrives in a happy marriage. There is less depression and anxiety, fewer phobias and suicides. Immune function is better, and the risk of several major health problems, including heart disease, diabetes, and cancer, is reduced.

The flip side is that a bad marriage is a strong risk factor for poor health. Chronic stress takes a major toll on the body. It depresses the immune system. It elevates blood pressure, contributes to cardiovascular disease, and can actually trigger a heart attack. It creates stomach problems, tenses the muscles, and impairs memory and mood.

What makes marital stress the most harmful type of stress—more so than, say, problems at work—is that you can’t get away from it. When your marriage isn’t working, your home, the one place that should be a refuge from the slings and arrows of the world, becomes itself a significant source of stress.

Many of the studies on marital tension have looked at its effects on cardiovascular health. In one of them, Canadian researchers followed 103 married people with slightly elevated blood pressure for three years. They found that among the men and women who rated their marriages as unhappy, those who spent the most time with their spouses had higher blood pressure. Amongst the people in happy marriages, time spent with spouses had the opposite effect: it lowered blood pressure.

Fighting Can Make You Sick

Hundreds of studies underscore the adverse effects of chronic stress on the immune system. It reduces the production and function of several types of immune cells that fight off infections and rolls out the welcome mat for all types of disease.

Ohio State University researchers looked at how marital conflict affected 90 newlywed couples and 31 older couples who had been married for an average of 42 years. They took blood samples of the study participants before, during, and after a “conflict discussion.” Among the couples who displayed negative, hostile behaviors during conflict resolution, significant rises in cortisol and other stress hormones were observed, along with declines in immunological markers. The conclusion: “Abrasive marital interactions may have physiological consequences even among older adults in long-term marriages.”

Nor am I suggesting that you should run from a bad marriage. Divorce, even from a bad marriage, is painful. Mickey Rooney, who was married eight times, once said that each divorce was like a train wreck. Speaking from personal experience, both Connie and I would agree.

Although marriage is the most important relationship in most people’s lives, it is not the only one. We are not just husbands and wives. We can also be parents and children, siblings and friends. What is important, regardless of your marital status, is the human connection.

The long and short of it is that human beings are not meant to be alone. We were designed to interact with other people, and we function best mentally and physically when we nurture and are nurtured by others. Cultivate these relationships for selfish reasons if nothing else. The stronger and happier your relationships are, the better your physical health, well-being, and enjoyment of life will be.

Cardiovascular Disease Is Not Inevitable
What Is Diabesity?