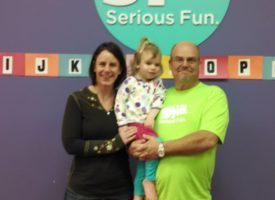 Kent Moore walked through the doors of the Whitaker Wellness Institute for the first time in September 2013. He was a classic example of conventional diabetes treatment gone wrong. Fortunately, we were able to help him. This is his story, in his own words.

My name is Kent Moore. I’ve been a type 2 diabetic for many years. Since I was started on insulin about 10 years ago, I gained over 100 pounds. My father-in-law encouraged me to go to Dr. Whitaker’s Wellness Institute because of my constant weight gain and out-of-control diabetes.

When I arrived at the clinic, I weighed 341 pounds and was on 220 units of insulin. I didn’t think I could live without insulin, but the first thing my doctor did when I got to the clinic was take me off it. I was skeptical at first, but with the diet and supplements he recommended, my blood sugars were better than they were on insulin. I feel better, I have a lot more energy, I walk back and forth from the clinic to the hotel a couple times a day, and the swelling in my extremities has gone down.

9-27-13…But Natural Treatments for Diabetes Did

After only 10 days in Whitaker Wellness’ Back to Health Program, I have lost 30 pounds. I am still off insulin, which I had been told was a life-sustaining necessity. This clinic proved to me that it isn’t. With the mini-fast diet, exercise, and supplements, I can take control of my own life again. I’m so excited because for the first time in 10 years, I’ll be living a life that I choose, not one that’s dictated by medicines, insulin, and needles. I could not be happier with the progress I’ve seen here and I’m ready for the future.

After returning home, I’ve continued to lose weight. I went from 341 to 311 during my two weeks at Whitaker Wellness. When I weighed myself last night, I was 289. That’s just from getting off insulin and doing the mini-fast.

I’m not on any medications for diabetes treatment. My only prescription is for high blood pressure, but I take a lot of supplements. I’m feeling great. My sugars were high a couple of times. I went to a birthday party and overdid it a little, but even at that, it was about 350, and I had that regularly when I was on insulin. My fasting sugars are continuing to go down—they’re actually lower than when I was on insulin. So I’m encouraged. It’s been unbelievable, like I got my life back.

I’ve modified my portion sizes and I eat a lot healthier, more salads and fish than I did before. But the main thing is the mini-fast. I have so much more energy when I’m off insulin and the other medications. They took the life out of me. I couldn’t climb the stairs without wheezing. My family is very excited. I have a two-year-old daughter. I’m encouraged now that I might be able to see her grow up.

At first, I was wondering if I could continue my progress at home, but it has actually been really easy to continue the mini-fast program as a diabetes treatment. We skip breakfast in the morning, and on weekends we’ve been going walking while we pull our little girl on the sled. During the week it gets so busy so some days it’s a little different, but we know what we need to do and what our bodies need to stay healthy.

What helped a lot was getting my sleep apnea under control. My doctor at the clinic diagnosed me with sleep apnea and I’ve been using a CPAP machine ever since. I now have so much more energy during the day it’s unbelievable. This is good because I’ve been working 14 hours a day!

Just a quick update on my progress: My blood sugars are still a little higher than I would like; however, they are consistently lower then when I was on insulin. I have continued to lose between one and five pounds per week and have lost weight every week since leaving the clinic, even during the holidays. As of January 18, 2014, which is about four months after leaving the clinic, I weigh 259 pounds—down a total of 82 pounds.

I am confident that as my weight continues to drop, my blood sugars will become easier to maintain as well. The biggest change I see is how well I feel. I have more energy than I have had in years.

I wanted you to know that I recently reached my first major milestone. I am now at 240 pounds. That is 101 pounds less than when I entered Dr. Whitaker’s program. The real progress is measured in the way I feel. I can get on the floor and play with my daughter and go on long walks without getting winded. I can even clip my own toenails and pick something up off the floor without kicking it to a wall first. Please pass on my gratitude to Dr. Whitaker and his staff for all their help.

I’m feeling really good. I’m still doing the mini-fast in the morning—not as religiously as before—but I continue to lose weight. On my last update, I weighed 240 pounds. I currently weigh 225, which means I’ve lost a total of 116 pounds since my visit to Whitaker Wellness. My blood sugar is lower than when I was on insulin and I’m working hard to get it lower.

I still have lots of energy. In fact, my family and I just returned from vacation—we had a really great fishing trip! We’re in the process right now of buying a business in Texas: The Little Gym for kids. So I might be in Texas in early October for training. But timing could be good for us to join you for your 35th Anniversary Celebration later in October.

My blood sugars are still manageable. They are higher than I would like but lower and more consistent then I was ever able to maintain while on insulin. Thinking back on my diabetes treatment, I have become more and more frustrated with the medical establishment. The majority of the internal medicine doctors I have seen over the last decade wanted to medicate me without even examining me. It is so frustrating!

It has been 18 months since I waddled through the door at Whitaker Wellness at 341 pounds. I stepped on the scale this morning at 214 pounds. We have recently purchased two new The Little Gym locations in North Austin.  I have not even tried to diet since beginning the purchase process, yet the weight still slowly drops. My energy level is still far better than it has been in years, which is a good thing since I have a three year old at home and a gym full every day at work. It is nice being able to sit cross-legged on the floor in the gym and teach a class. That is one of the little things that I could not have done a year ago and is so important today.

I only step on the scale once a week, every Monday morning. Every week I expect to see the weight going up but it doesn’t. I know the supplements are a big part of it but equally important is the lifestyle changes we have made as a family. We eat at home much more than we used to, and we have learned to cook healthy. Life is good and for the first time in many years my health is not an anchor preventing me from living life to the fullest.

I’m back at Whitaker Wellness for a tune-up. I haven’t had any real issues, but I wanted to recheck my A1C, make sure all my levels are okay, and update my supplements. I had to lessen the doses on a few supplements until I got used to them, then eventually added in Forward Plus. I just want to make sure I’m not missing anything.

I have lost about 125 pounds. The first 100 pounds took a year and a half to come off, and I’ve lost 20 more pounds in the last year, which is really slow, but good! My energy is so much better. I still know that there are other things I can do to tweak it to make it all even better. I still do the mini fast during the week, Monday-Friday, and then I eat with my family on the weekends. That really helps. Actually, it’s funny because when I do the mini-fast during the week, I feel really good. I’ll eat pancakes with my daughter on Sunday and just feel blah.

I exercise three days a week. We bought an elliptical at Christmas time. I haven’t had that much ambition to start using it every day, but I am going to start making the time to exercise more. I do get a lot of exercise and walking with my job.

About three months after I left here last time, I saw my doctor for a regular scheduled appointment. He told me that I was foolish to go off all the medicines that Dr. Whitaker’s clinic had discontinued. He wanted me to go back on almost everything, including insulin as diabetes treatment. I didn’t do anything he recommended, and I didn’t go back. I stuck with what Whitaker Wellness recommended. I was on so much medication I felt like a slug. I couldn’t walk up a full flight of stairs without pausing in the middle. I was so heavy. I just felt so rotten all the time.

Now I play with my daughter and can chase her around the yard. I would like to have a doctor back home. If I could find one that believed in a more holistic approach, I would see them in a heartbeat. But it’s like all they ever do is medicate, medicate, medicate. That’s their approach to doctoring, when that should be the last resort. I am glad to have found Whitaker Wellness. It’s really changed my way of how I look at health.

It’s been a gradual but steady improvement, but my health is 100% better than it was before. Good report!

Neurofeedback: A Key to Brain Recovery
The Sordid History of Bypass Surgery