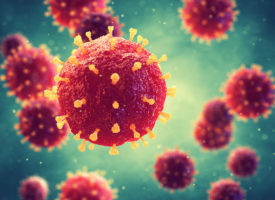 Viruses are strange critters. Scientists debate whether they are even alive, since they lack the machinery of living cells and can’t produce energy or replicate on their own. Nevertheless, these minuscule microbes, which are 100 times smaller than bacteria, are the most abundant biological entities on the planet.

Most viruses are harmless and some are beneficial, but others are virulent. Plant viruses are responsible for billions of dollars in crop losses. Parvovirus, distemper, and rabies afflict animals, and mite-borne viruses are linked with honeybee colony collapse. Human viral infections run the gamut from annoying or embarrassing (warts and fever blisters) to chronic (herpes and hepatitis) to potentially lethal (Ebola, HIV, and cancer-causing papillomavirus) to tragic (Zika, a mosquito-borne virus associated with serious birth defects).

Then there are our most familiar viral infections: colds, flu, upper respiratory infections, sore throats, runny noses, congestion, bronchitis, and coughs. You’d think by now science would have made some headway against these common afflictions, but viruses present a unique challenge.

Antibiotics kill bacteria by damaging their cell walls or disrupting their replication. Viruses, however, have no cell walls, and they reproduce by infecting host cells, hijacking their molecular machinery, and turning them into assembly lines that churn out thousands of new viruses, which invade other cells. Within days of a flu infection, your body is home to trillions of viruses!

Although drug companies have developed antivirals for HIV, hepatitis, and herpes, they’ve struck out against the common cold. Three antivirals (Tamiflu, Relenza, and Rapivab) have been approved for influenza, but unfortunately, they’re not very effective. They reduce symptom duration by a day or two at best—at a cost of $150!

Antibiotics are often prescribed, even though they are 100 percent ineffective against viruses. Patients may think they help, but any improvements are in spite of the antibiotic, not because of it. Inappropriate prescribing only harms patients and contributes to antibiotic resistance.

Conventional medicine’s favorite weapon against influenza is flu shots. Vaccines prime your immune system to recognize particular viruses so you can effectively fight them off. However, viruses mutate so rapidly that the viral strains in the vaccine often don’t match the prevailing flu viruses. According to the CDC, vaccination reduces risk of flu by about 50 percent if—and it’s a big if—the match is spot on. A particularly poor match offers zero protection. I don’t get flu shots or recommend them for my patients.

What about symptom relief? Judicious use of aspirin and Tylenol may make you feel better, but most over-the-counter remedies work no better than placebo. Studies show that antihistamines, cough suppressants like Robitussin, and phenylephrine decongestants such as Sudafed and Neo-Synephrine are worthless against viruses. Pseudoephedrine (which is stashed behind the counter and requires an ID to purchase) and decongestant nasal sprays do relieve congestion, but they have adverse side effects and shouldn’t be used for more than two or three days. Be particularly wary of combo cold/flu formulas that contain multiple meds. Why take drugs that don’t work for symptoms you don’t have?

It’s normal to want to “take something” when you’re feeling miserable, but sleep, extra fluids, chicken soup, and other natural remedies are more effective than the cold and flu meds sold in drugstores.

When you’re sick, don’t be a martyr. Stay home and rest for a few days. If you’re congested, try my wife’s trick of sprinkling cayenne pepper in your soup. Now, that’ll open you up! N-acetyl cysteine (600 mg twice a day) helps break up mucus, and nasal rinses with saline in warm water also relieve congestion.

For a sore throat, I recommend gargling with salt water (1 teaspoon in a cup of warm water), medicated cough drops, or sprays that numb the throat. Honey is a proven cough suppressant, and zinc lozenges have been shown to reduce the duration of cold symptoms by two to three days. Echinacea, elderberry, aged garlic, and Oscillococcinum and other homeopathic remedies also have a well-deserved reputation as cold and flu remedies.

As for vitamin C, I’ve always followed Linus Pauling’s advice: “If you take a reasonable amount of vitamin C regularly, the incidence of the common cold goes down. If you get a cold and start immediately [500 mg every hour or two], as soon as you start sneezing and sniffling, the cold just doesn’t get going.”

Speaking of vitamin C, if you’re really sick, find a clinic that administers intravenous vitamin C. A high blood level of this vitamin, which can only be achieved through IV delivery, actually kills viruses, bacteria, and cancer cells while leaving normal tissues unharmed.

Researchers from Puerto Rico, recently published a case report of a 54-year-old woman with a full- blown case of Zika—fever, chills, headache, the whole nine yards—who was treated for three days with increasing doses of IV vitamin C. She began to feel better after her first treatment, and by day four, she was completely symptom-free.

Preventing Viruses in the First Place

Your immune system is quite good at defending against viral infections, but it can always use extra support, especially this time of year. Vitamin D plays a key role in immune function, and natural production falls during the darker days of fall and winter. I recommend taking enough supplemental vitamin D3 to maintain a blood level of 40–60 ng/ mL. For most of my patients, this requires 2,000– 5,000 IU per day.

A recent review of placebo-controlled studies found that probiotic supplements reduced the frequency and duration of upper respiratory infections, as well as cold-related school absences in children. N-acetyl cysteine not only improves symptoms but has antiviral and antibacterial activity; 600 mg twice a day was shown to dramatically reduce the risk of developing flu in older people exposed to the virus.

One of these days scientists will discover effective treatments for common viral infections, but so far, their ability to “hide” inside host cells and their rapid rate of mutation makes viruses an elusive target. Until then, minimize your exposure to infection, support your immune defenses, and, if you do get sick, remember the wise words of Darrell Huff: “Proper treatment will cure a cold in seven days, but left to itself, a cold will hang on for a week.”