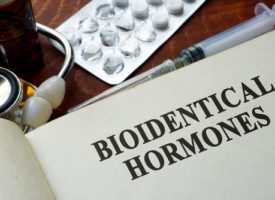 I have been prescribing hormone replacement therapy (HRT) for my patients for more than 30 years, and during that time, I’ve seen its reputation rise and fall. Female HRT took a hit in 2002, when the Women’s Health Initiative uncovered the very real dangers of Premarin and Provera (horse estrogen and synthetic progestin). A similar scenario played out more recently with testosterone after seriously flawed studies broadcasted links with cardiovascular disease. Throughout all these ups and downs, I’ve maintained confidence in HRT because the only hormones I’ve ever recommended are bioidentical hormones, which are indistinguishable from those produced in the human body.

Today, HRT is making a comeback as current research confirms the safety and efficacy of bioidentical hormones, and conventional physicians and pharmaceutical companies are finally coming around. At Whitaker Wellness, we prescribe individualized doses of bioidentical hormones to treat specific conditions, such as estrogen for menopausal symptoms, progesterone for autoimmune diseases, and testosterone for heart failure. However, we also prescribe hormone replacement therapy for men and women who are dealing with the normal challenges of growing older. The goal is not to turn back the clock but to improve healthspan and quality of life by restoring levels of key hormones that decline with age.

For men, many of the unpleasant aspects of aging, including reductions in muscle mass, sexual desire and function, energy, and sense of well-being, are directly related to drops in testosterone. I can tell you from personal experience that bioidentical testosterone replacement, which I’ve been using off and on for several years, makes a noticeable difference in these areas. It also reduces risk of osteoporosis, sarcopenia, anemia, and heart disease—yes, heart disease.

A few years after the media circus that scared men into believing testosterone caused heart disease, it turns out that it’s actually protective. In a recent study, researchers divided 83,000 men with initially low testosterone into three groups: men treated with testosterone with levels in the normal range; treated men whose levels remained low; and untreated men.

Compared to the untreated men, those who maintained optimal testosterone levels with hormone replacement therapy had dramatic reductions in risk of death (56 percent), heart attack (24 percent), and stroke (36 percent). Men whose levels remained low despite taking testosterone didn’t do much better than the undertreated group. This study underscores not only the safety of testosterone replacement but also the importance of follow-up and testing to make sure hormone levels are in the optimal range.

Fears of prostate cancer have also given testosterone replacement a bad rap, but this too has been disproven. A large population-based study published recently confirms earlier findings, concluding, “… testosterone therapy was not associated with an increased risk of high-grade prostate cancer.” Men with prostate cancer should steer clear because testosterone can fuel existing tumors, but for everyone else this concern should be laid to rest.

Women are more acutely aware of the effects of hormones, especially those who are hit hard with hot flashes, mood swings, sleep disturbances, and other symptoms of menopause. Hormone replacement therapy significantly enhances quality of life during this time, and short-term use of low-dose estrogen and progesterone is a common recommendation.

This strategy, however, ignores longer-lasting consequences of age-related hormone declines, like bone loss, vaginal dryness, skin aging, and sarcopenia. Granted, the studies on female hormone replacement therapy show some risks, especially when started later in life. But the risks of stroke, blood clots, heart disease, and breast cancer in the Women’s Health Initiative were associated with Premarin and Provera, which unlike bioidentical estrogen and progesterone are foreign to the human body.

Regarding breast cancer, the culprit is not estrogen but progestin (Provera). Study participants who took estrogen alone had no increased risk of cancer. Progestin has a long list of negative effects, while natural progesterone has demonstrated benefits for sleep, bone health, and blood pressure and does not increase risk of blood clots or breast cancer.

Testosterone is also an important hormone in women, and small doses of topical testosterone are often added to enhance mood, energy, and libido.

DHEA is also associated with several age-related disorders. Often called a “prohormone” because it is converted in the body into estrogen and testosterone, DHEA’s importance increases after hormone production in the ovaries and testicles peters out. Supplemental DHEA has been shown to improve strength, muscle mass, bone density, mood, sense of well-being, and sexual function—and it has an excellent safety profile. Although there are theoretical concerns regarding hormone-dependent cancers, the only established adverse effects are mild acne and facial hair in women, which can be reversed with lower dosing.

Growth hormone has been pegged as the ultimate anti-aging hormone since 1990, when Daniel Rudman, MD, reported that treating older men reduced body fat and increased lean body mass, bone density, and skin thickness to a degree “equivalent in magnitude to the changes incurred during 10 to 20 years of aging.” Subsequent studies have also demonstrated improvements in cognitive function. Adverse effects include carpal tunnel syndrome, gynecomastia, fluid retention, and insulin resistance. Because growth hormone has to be injected and costs $600-800 a month, at Whitaker Wellness we use it primarily for frail elderly patients.

Thyroid hormones also decline with age, and I recommend that everyone have their levels checked periodically and supplement with natural thyroid, if indicated.

Should You Use Hormone Replacement Therapy?

Hormone replacement therapy is not a cure-all, nor is it for everyone, but consider this. Doctors don’t hesitate to prescribe drugs for osteoporosis, mood disorders, sexual problems, cardiovascular disease, and a long list of other conditions that increase with age. If bioidentical hormone replacement therapy—which is much safer and more effective than most medications—can ameliorate some of these problems, why not give it a try?

How to Get Bioidentical Hormones

Opt only for bioidentical hormones. Blood tests should be done prior to and within three months of starting treatment so adjustments can be make to keep hormone levels within the range of a healthy young adult. (Lab tests for men should include estradiol; testosterone often converts to estrogen, which can cause problems that must be addressed.) Testosterone, estrogen, and DHEA are not recommended for anyone with breast, prostate, or other hormone-mediated cancers.

Except for DHEA, hormone replacement therapy requires a prescription. To locate a physician experienced in bioidentical hormones, visit acam.org or worldhealth.net. To schedule an appointment at Whitaker Wellness, call 866-944-8253.