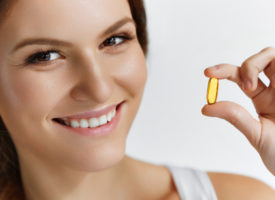 Carnitine and I go way back—I wrote about it in the very first issue of Health & Healing in August 1991. Back then all we really knew about this supplement was that it improved angina, heart function, and exercise tolerance in patients with coronary artery disease and heart failure. As further research emerged over the years, I have added it to a handful of other treatment protocols.

Now, however, I’m recommending L-carnitine to more and more of my patients because recent studies show that when older people take this safe, inexpensive nutritional supplement, it boosts physical and mental energy and endurance, reduces fatigue and muscle loss, and enhances cognitive function.

Carnitine is an amino acid that is synthesized in the liver and kidneys—and concentrated in the body’s most metabolically active organs: the brain, heart, and muscles. Its primary job is to transport fatty acids into the mitochondria, where they’re burned for energy.

Young, healthy people produce all the carnitine they need. However, levels may be depleted by kidney and liver disease, genetic defects, valproic acid (an epilepsy drug), cancer—and advancing age. Declines in mitochondrial function are a significant underlying cause of the energy drain associated with aging, and carnitine plays an essential role in increasing energy production. Therefore, it’s not surprising that deficiencies in this amino acid are associated with fatigue, loss of muscle mass and increase in body fat, mental and physical slowdown, and frailty.

This leads to an obvious question. Could replenishing carnitine stores with nutritional supplements delay or reverse some of the adverse effects of aging?

Puts Pep in Your Step

Clinical trials of supplemental L-carnitine have yielded consistently positive results in terms of self-reported physical and mental fatigue, ability to exercise, and improvements in body composition—particularly when the study subjects are older and/or have documented carnitine deficiencies. Here’s an example.

Italian researchers enrolled centenarians, who fatigued easily and had impaired strength and mobility, and gave them either 2 g of L-carnitine or placebo capsules daily. After six months, no significant changes were noted in the placebo group. Those who took L-carnitine, however, gained an average of 8.4 pounds of muscle mass and lost four pounds of fat.

Mental and physical endurance improved, and they gained an average of four points on the 0–30 scale of the Mini-Mental State Examination, a common test of memory function.

Now you can see why I’m so enthusiastic about this supplement. If 100-year-olds can have such remarkable turnarounds, just imagine what it could do if you started taking L-carnitine in your 60s or 70s, when carnitine concentrations begin to plummet?

At Whitaker Wellness, we put all our patients with cardiovascular disease on L-carnitine. Its efficacy was confirmed by a meta-analysis published recently in the Mayo Clinic Proceedings. Researchers analyzed 13 placebo-controlled studies involving 3,629 patients with a history of heart attack. Compared with placebo, L-carnitine reduced angina by 40 percent, dangerous ventricular arrhythmias by 65 percent, and death by 27 percent.

Before we go on, I want to address a safety issue regarding heart disease. A few days before this meta-analysis was released, the media had a feeding frenzy over a small, insignificant study that suggested dietary carnitine and L-carnitine supplements promote cardiovascular disease. The stupidity of this nonsensical conclusion is evident to anyone who bothers to check the science. But most media outlets do little more than regurgitate press releases or march lockstep with the likes of the New York Times, which did a real hatchet job, and the sound bite about “the dangers of carnitine” went viral.

Meanwhile, the stunning, absolutely newsworthy Mayo Clinic Proceedings meta-analysis was all but ignored. Nobody retracted the warning against L-carnitine—you’ll still find it on the Internet from what I used to think of as reputable sources such as Dr. Oz. Do not believe it. The science indisputably proves that L-carnitine is exceptionally safe and does not cause heart disease. On the contrary, it’s one of the best supplements for treating cardiovascular conditions.

L-carnitine is often positioned as a weight loss aid. Although it definitely improves body composition in older people, many of the studies in younger people aren’t so positive, probably because they already have optimal carnitine stores. It can, however, enhance exercise endurance and capacity in all age groups by increasing muscle carnitine levels and improving energy metabolism. L-carnitine is by no means a magic bullet, but if you’re willing to exercise regularly—especially if you follow the mini-fast—it may help.

Several studies show that supplementing with carnitine, especially acetyl-L-carnitine, improves memory in older people and slows Alzheimer’s progression. The acetyl group in this type of L-carnitine can be used to form acetylcholine, an important neurotransmitter that markedly declines as dementia advances. Both forms, however, increase mitochondrial energy production and power up energy-starved brain cells.

Patients with cancer will likely benefit from L-carnitine as well. Most people who undergo chemotherapy and/or radiation report significant fatigue. In addition, advanced disease is associated with cachexia, or muscle wasting and weight loss, and low carnitine levels may well contribute to this. L-carnitine is not a cancer therapy, but it has been reported to improve fatigue and quality of life—and that’s reason enough to use it.

For all these reasons and more, I’m adding L-carnitine to my daily supplement regimen and suggest you consider doing the same.