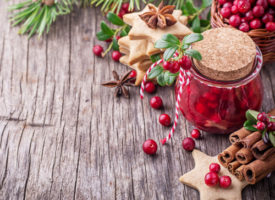 December is in full swing and in honor of the season’s many festivities, I want to share a few fun and helpful holiday-themed remedies with you.

Candy canes may only surface during this time of year, but peppermint is a natural holiday health cure that can and should be kept in your medicine cabinet year round—especially if you suffer with irritable bowel syndrome (IBS). Peppermint oil is a proven remedy for relieving pain, gas and bloating, diarrhea, and other stomach problems associated with this common condition. In one study, Italian researchers gave patients with IBS either peppermint oil or placebo capsules twice a day. After four weeks, three quarters of the patients taking peppermint reported a greater than 50 percent improvement in symptoms.

Peppermint oil can cause heartburn in some people, so I suggest taking only enteric-coated capsules, which don’t break down until they’ve passed through the stomach. The dose used in most studies is one to two capsules containing 0.2 mL of oil twice a day. I also recommend a cup of fragrant peppermint tea after meals to aid digestion. Look for peppermint oil capsules and tea in your health food store.

Though most often used for baking around the holidays, cinnamon’s medicinal benefits are pretty impressive. This natural holiday health cure improves insulin sensitivity and has profound effects on blood sugar. German researchers gave patients with type 2 diabetes who were on oral drugs either an aqueous extract of cinnamon (the equivalent of 3 g of cinnamon powder) or a placebo daily. After four months, the group taking cinnamon experienced a 10.3 percent reduction in blood sugar, compared to the placebo group’s drop of 3.4 percent. This effect was even more pronounced in an earlier study, in which blood sugar levels fell 18 to 29 percent with doses of 1 to 3 g of cinnamon per day.

Studies confirm that cinnamon also lowers blood pressure, a benefit I’ve been hearing about from patients and readers for years. Marsha, a Health & Healing subscriber from Memphis, reported that taking a cinnamon extract and drinking cinnamon tea lowered her blood pressure from 215/110 to an average of 125–135/60–70! In addition, it has been shown to drive down triglycerides 23 to 30 percent and LDL cholesterol 7 to 27 percent over a 40-day period.

I recommend taking a cinnamon supplement, drinking cinnamon tea, or adding cinnamon to ground coffee before brewing. The suggested dose is a quarter to a half teaspoon twice a day or 1 to 3 g if you are using a supplement.

In biblical times, frankincense was as valued as gold. This fragrant resin has also been treasured for its many medicinal uses, and it remains a staple in Ayurvedic medicine. The bulk of modern-day research on this holiday-themed cure focuses on an extract from the Indian frankincense tree, Boswellia serrata. Scientists have discovered that this extract mimics the anti-inflammatory effects of NSAIDs and helps relieve arthritis pain—without any negative side effects.

A recent double-blind, placebo-controlled study examined the effects of Boswellia serrata on patients with osteoarthritis of the knee. Those who received the supplement daily for three months reported significant pain relief, some in as little as one week. They also experienced improvements in function and stiffness. In addition, the group receiving Boswellia had markedly lower levels of an enzyme that breaks down cartilage. Boswellia supplements are safe and well tolerated. Look for them in your health food store and use as directed.

Urinary tract infections (UTIs) are not something people like to talk about, but they are extremely common—and surprisingly easy to prevent. One Health & Healing subscriber told me she used to have frequent UTIs until she started drinking unsweetened cranberry juice. At the first sign of an infection, she drinks one or two glasses a day, and she says she hasn’t had a UTI since she started this preventive measure.

Cranberry juice is one of those “kitchen remedies” that really works. These berries contain proanthocyanidins and a sugar called d-mannose that prevent E. coli bacteria from sticking to bladder walls and setting up residence in your urinary tract. Regular cranberry juice is full of sugar, so I recommended the unsweetened varieties. They are very tart, but you can sweeten them with stevia or xylitol. Another option is cranberry extract supplements, which are sold in health food stores. If you’re prone to infections, use cranberry juice or supplements regularly.

If you have any holiday-themed remedies you’d like to share, please email them to me at [email protected].

Now that we’ve looked at a few natural holiday health cures, I’d like to share a healthy holiday recipe that incorporates two of those ingredients: cinnamon and cranberries. Try this healthy dessert in place of traditional holiday sweets. Your waistline and blood sugar levels will thank you.

Directions:
Preheat oven to 350° F. Core apples from stem side almost through the bottom. Remove ½ inch of peel from top of each apple. Mix apple juice concentrate with cinnamon and nutmeg. Fill each apple cavity with 1 teaspoon juice concentrate, 2 teaspoons cranberries, and 1 teaspoon walnuts. Place in a small baking dish. Pour ½ inch water around apples. Bake for 20 minutes, or until apples are soft but still holding their shape. Cut in half before serving. Serve warm or cold.

Treating Fibromyalgia Naturally
What to Do If You’ve Already Had Bypass or Angioplasty?