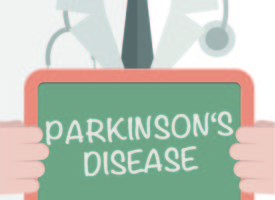 What do singer Linda Ronstadt, former US attorney general Janet Reno, actor Michael J. Fox, heavyweight champion Muhammad Ali, and a million other Americans have in common? They all have Parkinson’s disease.

Parkinson’s disease is a tough diagnosis. The underlying pathology is death of cells in the substantia nigra, an area of the brain that produces dopamine, a neurotransmitter involved in movement. As levels of dopamine progressively decline, tremors, rigidity, and problems with gait, balance, speech, swallowing, mood, sleep, and cognition worsen.

The most common treatments are levodopa (L-dopa), a drug that is converted to dopamine, and carbidopa, which makes more dopamine available in the brain. Other Parkinson’s disease therapies include dopamine agonists, which mimic the activity of the neurotransmitter, and medications that affect its breakdown or release. There’s also deep brain stimulation, which involves the implantation of electrodes in the brain connected to a device that generates electrical pulses that help reduce involuntary movements.

These and other conventional Parkinson’s disease therapies are not curative. The best that can be expected is delaying degeneration and managing symptoms. The natural treatments for Parkinson’s disease we use at Whitaker Wellness do not cure this disease either, or even eliminate the need for drugs. But they do seem to slow progression, improve function, and enhance overall health

Researchers agree that the most exciting and promising frontier in Parkinson’s disease is stem cell therapy. The enthusiasm is warranted. Stem cells have the unique ability to turn into many different types of cells. Coaxing them into becoming dopamine-producing neurons and safely delivering them to the brain could be a cure for Parkinson’s disease.

Much of the research is still in the laboratory and animal-study stages, and efforts to implant stem cells directly into human brains have run into problems. As a result, most physicians will tell you this therapy isn’t ready for the limelight. That’s just not true.

For the past two years, we’ve been treating patients at the Whitaker Wellness Institute with adult stem cells. These cells are isolated from a small amount of the patient’s own fat, which is removed by liposuction, then concentrated and infused back into the body, where they home in on areas of injury or degeneration. Adipose-, or fat-derived stem cell therapy is not a cure. But it is a safe, easy, and relatively inexpensive means of harnessing the regenerative properties of these remarkable cells.

Parkinson’s Disease Testimonial: “I Would Be a Vegetable”

You can’t tell Garnet Howells, who had stem cell treatments at the clinic in March 2013 and February of 2014, that this therapy isn’t ready for prime time. “I have had Parkinson’s disease for about 10 years. I believe I would be a vegetable by now if it weren’t for stem cell treatments.

“I have gone through many stages of the disease. My balance was poor, I was unable to walk normally, my speech was impaired, and I used to have a fixed stare. After receiving treatment, all these problems have improved. Though I still have to keep up with the Parkinson’s medicine, I can live an almost normal life. I just finished a project of laying blocks in my backyard. I can’t say it was easy, but I got the job done—thanks to stem cells.

“My Parkinson’s doctor thought I was wasting my money on the first session, but after seeing how much stem cells helped me, she encouraged me to have another treatment a year later.”

We also treat our patients with hyperbaric oxygen therapy (HBOT) and glutathione. HBOT floods the brain with oxygen, which “wakes up” damaged cells and promotes the growth of new blood vessels to nourish them. It also mobilizes your body’s own stem cells and stimulates neurogenesis, or the formation of new neurons—which is why HBOT is an effective treatment for stroke, head injuries, and neurodegenerative disorders, including Parkinson’s disease.

At the clinic, we use HBOT in combination with adult stem cell therapy, along with intravenous (IV) glutathione. Glutathione is the major antioxidant produced in neurons and cells throughout the body. Oxidative stress and inflammation are implicated in the dysfunction and ultimate death of dopamine-producing cells. Restoring depleted glutathione stores slows this destructive process and improves symptoms in patients with Parkinson’s disease. IV administrations helps ensure it gets into the brain.

I’ll never forget one of the first patients we treated at the clinic with IV glutathione. He had a significant tremor in his left arm and arrived in a wheelchair. After his second IV treatment, his tremor decreased and he was up and walking, albeit with an unsteady gait and his arms stiff at his sides. After his third infusion, he was walking more or less normally, with a confident stride, arms swinging—and no tremor.

Finally, do not underestimate the power of lifestyle changes and nutritional therapies. In a recent study researchers enrolled 60 patients with mild to moderate Parkinson’s disease and had them take a brisk, 45-minute walk three times a week for six months. When the patients were reevaluated, improvements in motor function, fatigue, fitness, mood, memory, and cognition were so dramatic that researchers suggested walking should be considered a medical therapy.

Diet recommendations include drinking coffee, which definitely protects against Parkinson’s disease and appears to slow its progression, going easy on carbohydrates, and either lowering your protein intake or eating it 30 minutes or more after taking L-dopa, since protein may interfere with the drug’s transport to the brain.

On the supplement front, start with a multivitamin and extra vitamin D, as a 2013 placebo-controlled trial demonstrated that people who took vitamin D had much slower deterioration. I also recommend coenzyme Q10, fish oil, NADH, carnitine, lipoic acid, and creatine. These supplements address underlying oxidative stress, inflammation, and mitochondrial dysfunction and have been shown to improve Parkinson’s disease symptoms, delay deterioration, and support overall brain health.

To Recap
It is unfortunate that few conventional physicians embrace these natural treatments for Parkinson’s disease because they offer patients something that’s sorely lacking: hope for a better quality of life.

To learn more about stem cell therapy, hyperbaric oxygen, and IV glutathione treatment at Whitaker Wellness, call (949) 632-8890 or click here for a complimentary consultation with a friendly and knowledgeable Patient Services Representative.