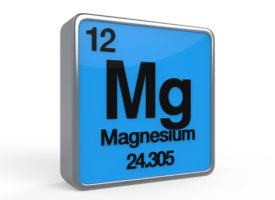 Each month I like to feature an article from the early days of Health & Healing to illustrate the timelessness and enduring efficacy of nutritional supplements. That’s the beauty of natural therapies. They worked more than two decades ago, they work today, and they’ll work hundreds of years from now. Enjoy this article on magnesium, which was first published in my newsletter in September 1991.

Is Magnesium a Miracle Nutrient?

If I was limited to only one mineral supplement, I would definitely choose magnesium. This impoverished second cousin to calcium is far more powerful, important, and has more therapeutic benefits than calcium, or almost any other mineral. I do not understand—with all the published data showing the benefits of using magnesium as a therapy—why most physicians simply ignore it completely. Well, I don’t.

In my practice I use oral magnesium with virtually every patient. I also administer magnesium intravenously for certain conditions—all with good reason.

Some of the more popular “new drugs” are called calcium channel blockers. By altering the access of calcium into the cell, these medications relax the smooth muscle in the artery wall and cause the patient’s blood pressure to fall.

Magnesium functions in much the same way—with none of the side effects. You might say it’s nature’s calcium channel blocker. Numerous studies have shown that supplementation with magnesium often causes a significant drop in blood pressure.

The heart attack patient, in my opinion, should routinely get IV magnesium as soon as he hits the emergency room, just as he receives oxygen by mask. Used appropriately, substantial amounts of magnesium can be given without any toxicity at all, with amazing survival benefits.

In one study, 103 heart attack victims were randomly assigned to receive magnesium infusion or a placebo. In the magnesium infusion group, there was only one death out of 50 patients (2 percent), while in the 53 patients receiving placebo, there were nine deaths (17 percent).

Studies show that when a heart attack occurs, there is a massive dumping of magnesium from the heart muscle. This rapid loss of magnesium weakens the heart and makes it vulnerable to fatal cardiac arrhythmias.

Cardiac arrhythmia is the most frightening as well as most dangerous manifestation in patients with heart disease. Given intravenously, magnesium is a powerful stabilizer of heart rhythm.

In one study out of a medical center in California, 11 patients with ventricular tachycardia (a particularly dangerous arrhythmia) were given intravenous magnesium. Seven out of the 11 converted almost immediately (i.e., the arrhythmia was corrected), and all 11 patients converted while under observation.

In other studies, magnesium infusions have been shown to eliminate dangerous cardiac arrhythmias even when the more routine drugs have failed. Infusion of magnesium for control of cardiac rhythm is not only a powerful therapy for heart irregularities, but is also exceptionally safe.

Magnesium in the Diabetic

Diabetes is a treacherous disease, and one of the worst complications is blindness from retinopathy. Low magnesium levels seem to put diabetic patients at risk of retinal bleeding, and certainly gives us a powerful reason to supplement patients with low level of magnesium.

Most diabetics are magnesium-depleted, and for obvious reasons. The elevated blood sugar levels often act as a diuretic, causing the diabetic to both drink copious amounts of water and urinate profusely. This flushing of the body eliminates substantial amounts of beneficial minerals—potassium, zinc, chromium, calcium, and magnesium.

A second reason is that insulin and oral drugs have been shown to deplete magnesium, and almost all diuretic drugs are notorious for depleting both magnesium and potassium. Potassium is often replaced, but physicians routinely “forget” to replace magnesium.

When magnesium levels are measured in diabetics, only 10 percent of them register within what is considered to be normal. Ninety percent have magnesium deficiency. Almost 15 years ago, it was demonstrated that diabetic patients with the lowest magnesium levels had the highest rate of retinal bleeding and subsequent blindness. In my practice, every diabetic patient receives magnesium supplementation. Several of these patients with diabetic retinopathy have, much to the surprise of their ophthalmologists, experienced substantial improvement when magnesium was added to their therapy.

Intravenous magnesium is a powerful tool that can stop the wheezing of an asthmatic patient, even when other medications have failed. I was surprised at this report, as you may be.

Magnesium: What Should You Do?

Based upon the research with magnesium, I would suggest the following: