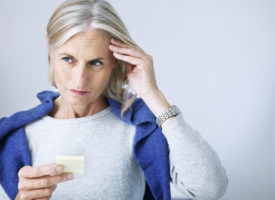 Anne’s daughter brought her to the clinic because she was concerned about her mother’s memory. Over a three- to four-month period, this 85-year-old, who was very involved in her retirement community, began missing meetings and social events, misplacing items in her house, and having trouble with names, including those of family members. She could easily recall things from her past, but more recent memories just didn’t stick.

It all came to a head when she fell outside her home. Confused and disoriented, she was taken to the hospital. MRI ruled out a stroke but did show some age-related changes in the brain. They were told that Anne had early dementia and she was prescribed a patch for mild to moderate Alzheimer’s disease.

But was it dementia—or the drugs she was taking?

You may not realize it, but dozens of classes of drugs can seriously impair cognitive function. You’d expect sleeping pills, sedatives, antipsychotics, and other medications designed to work directly on the brain to have some effect. Less obvious are the hundreds of prescription and over-the-counter meds that millions of people take every day for conditions like allergies, nausea, pain, diarrhea, ulcers, and urinary incontinence.

I’m talking about anticholinergics. Although these medications target a wide variety of common ailments, they have one thing in common: They suppress the activity of acetylcholine.

Acetylcholine is an important neurotransmitter, or chemical messenger, that is active in nerves throughout the body. In the cardiovascular system, it helps regulate heart rate and blood pressure. In the bladder, it affects the tone of the smooth muscles that control urination. In the gastrointestinal tract, it influences peristalsis and stomach acid secretion. And in the brain, acetylcholine is absolutely essential for the formation of memories, learning, and optimal cognitive function.

Alzheimer’s disease and age-related memory decline are marked by a reduction in levels of acetylcholine in the brain, and many of the prescription and natural therapies for improving cognitive function boost acetylcholine production. No wonder drugs that block this neurotransmitter adversely affect the brain. The mystery is why so few doctors are warning their patients about this very serious side effect of so many medications.

Anticholinergics are particularly problematic for older folks. People in the 65+ age group are twice as likely as younger people to have adverse reactions to drugs in general and seven times more likely to be hospitalized as a result. And because age-related memory loss is “expected,” underlying causes such as medication side effects are rarely even considered. In addition, memory problems are more pronounced when multiple anticholinergic drugs are taken, as many older people who suffer with multiple health problems do.

In a study published a couple of years ago, British researchers demonstrated just how serious this impact can be. They followed 13,000 men and women, age 65 and older, who were part of a study on aging, health, and cognitive function. After two years, the study volunteers who had the most significant anticholinergic “burden” (taking the most and/or strongest drugs with this effect) not only had a significantly greater decline in scores on tests of cognitive function, but their risk of death increased.

Another study found that taking just one potent anticholinergic may raise the risk of cognitive impairment by 46 percent over six years.

It is estimated that up to half of older Americans take one or more of these meds. That’s why it’s so important that you really understand your drug regimen—and not just your prescriptions. People tend to think that over-the-counter items are safer. However, one of the most potent and commonly used anticholinergics is diphenhydramine, a primary ingredient in Benadryl, Tylenol PM, Sominex, and at least 148 brand-name and countless store-brand medications for allergies, sleep, coughs, colds, and motion sickness.

Anticholinergics: The Potent and the Prevalent

Hundreds of medications in more than a dozen therapeutic classes have anticholinergic effects, including those listed below.

There is some good news. Once these medications are discontinued, memory and mental acuity often rebound. In other words, anticholinergic drug–induced cognitive decline is not the first step down the dark road of Alzheimer’s or other forms of dementia—it’s reversible.

It turned out that Anne, who had a relatively rapid onset of memory loss, had been prescribed not one but two drugs for urinary incontinence, oxybutynin (Ditropan) and darifenacin (Enablex). Both are anticholinergic, but oxybutynin is exceptionally potent. In one study, a negative impact on memory was noticed within one week of starting extended-release oxybutynin, and over the course of the three-week study, deterioration was “equivalent to that of 16 years of cognitive aging.”

Once Anne got off oxybutynin, her cognitive function improved.

It’s Up to You

You can’t just ask your doctor if any of the medications you’re taking are anticholinergics. Far too many physicians are dropping the ball on this very important issue. Nor can you depend on manufacturers, as this information isn’t always on product labels. Do your own research on the Internet, ask your pharmacist, and use the resources recommended on this page to figure out your anticholinergic burden and take steps to reduce or eliminate it.

As playwright Tennessee Williams said, “Life is all memory except for the one present moment that goes by so quick you can hardly catch it going.”

Consult with one of our friendly and knowledgeable Patient Services Representatives about the Whitaker Brain Recovery Program. Learn more about natural therapies that boost brain function and provide real solutions for depression and anxiety. Call (866) 611-3720 today or submit the Contact Us form below.