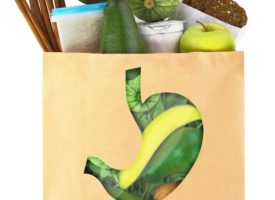 In 1676, Antony van Leeuwenhoek, the father of microbiology, scraped some plaque off his teeth, peered into a microscope, and discovered “many very little living animalcules.” In 2012, scientists completed the Human Microbiome Project, which determined that our bodies are home to 100 trillion microbes. They outnumber our own cells by a factor of 10!

The 200 scientists involved in this $170 million project evaluated samples taken from the gut, saliva, skin, and other sites in and on 242 healthy adults. They identified an astonishing array of microorganisms such as yeasts, viruses, and at least 10,000 types of bacteria in every nook and cranny. They also discovered that every individual’s microbiome (the totality of microbes) is unique, and that disturbances are linked with a host of medical problems.

Microbes, of course, can make you sick, but most work to your benefit. They help keep the gut healthy, digest food, and produce nutrients such as biotin, vitamin K, and short-chain fatty acids. They influence energy regulation and fat storage and thus play a role in metabolism, insulin sensitivity, and weight. And because of the close relationship between the gut and the brain, these organisms even affect your emotional well-being.

They also help prevent infections. Bacteria in the intestinal tract “teach” the immune system not to overreact to allergens and healthy tissues but to respond only to pathogens. Furthermore, for pathogens to cause harm, they have to compete with resident microbes for food and space. Most of the time, your beneficial bacteria keep the bad guys out.

A less robust collection of microbes, however, may invite disease. Scientists have discovered that the microbial milieu in individuals with asthma, inflammatory and irritable bowel disease, and obesity are markedly different than those of healthy people, and differences are also seen in diabetes, psoriasis, rheumatoid arthritis, skin conditions, and mood disorders.

Here’s a fascinating (and unorthodox) example. Researchers from the University of Minnesota reported on a woman with an aggressive C. difficile infection who had constant diarrhea that didn’t respond to antibiotics. Her gut bacteria was way off, and she was literally wasting away. So her physician performed a fecal transplant by introducing some of the patient’s healthy husband’s stool into her intestines. Her diarrhea cleared up immediately, and within two weeks the infection was gone. This therapy has been used in other patients, almost always with resounding success, and is being studied for additional therapeutic purposes.

Let’s look at what you can do to nurture your gut flora (short of fecal transplantation). First, avoid antibiotics whenever possible. These drugs can be lifesaving, but too often they are prescribed and taken for infections they’re useless against. Antibiotic-related diarrhea and vaginal infections aren’t caused by drugs. They’re caused by opportunistic bacteria that gain a foothold when antibiotics kill off beneficial flora.

Third, be aware that 70 percent of the antibiotics used in this country are given to livestock in a misguided effort to keep animals healthy. Although the bigger issue is antibiotic resistance, when you eat the meat from these animals, you’re also consuming traces of antibiotics.

Gastrointestinal: Probiotics not only reduce antibiotic-associated diarrhea, they’re helpful for diarrhea and constipation associated with irritable bowel and for ulcerative colitis, Crohn’s, and other inflammatory bowel diseases.

Depression and Anxiety: Anxiety gives us butterflies and stress ties our stomach in knots. Thanks to the gut-brain connection, Lactobacillus and perhaps other strains appear to tone down the stress response and improve anxiety and depression.

Skin: Studies have found links between intestinal bacteria and skin conditions such as acne and psoriasis.

Teeth: Lactobacillus, Bifidobacterium, and other strains improve oral health by reducing the number of cavity-causing bacteria in the mouth.

Obesity: Distinct differences are noted in the microbial communities of obese and thin people. Probiotics are no magic bullet for weight loss, but supporting your gut bacteria appears to reduce inflammation and other markers of obesity.

Diabetes: Supplemental probiotics have been shown to delay the onset of glucose intolerance in animals, and, in a 2010 human study, L. acidophilus supplements had a positive effect on insulin sensitivity.

Pregnancy/Birth: Norwegian researchers found that milk-basedLactobacillius protected against preeclampsia. And probiotics taken during pregnancy, infancy, or both decrease the risk of atopic dermatitis in children. Interestingly, children born by cesarean section are at increased risk of asthma, allergic rhinitis, and obesity, possibly because they weren’t inoculated with their mother’s bacteria in the birth canal.

Based on these studies and other research, perhaps doctors of the future will tell sick patients, “Take a few billion bacteria and call me in the morning.”

A Sweet Cure From the Kitchen
Worried About the West Nile Virus?